skip to main | skip to sidebar

Join the North Providence Mystery Book Club on Tuesday February 1, 2022. We will be reading Irene by Pierre LeMaitre. This is the first book featuring Camille Verhoeven, a commandant with a Parisian crime squad.

The book description from the publisher’s website is, THE NOVELIST KILLS BY THE BOOK

For Commandant Camille Verhœven life is beautiful. He is happily married and soon to become a father.

HE’S ALWAYS ONE CHAPTER AHEAD

But his blissful existence is punctured by a murder of unprecedented savagery. When his team discovers that the killer has form – and each murder is a homage to a classic crime novel – the Parisian press are quick to coin a nickname . . . The Novelist.

With the public eye fixed on both hunter and hunted, the case develops into a personal duel, each hell-bent on outsmarting the other. There can only be one winner. The one who has the least to lose.”

We will meet at 6:30 pm in the Second Floor Meeting Room and by Zoom. For more information, and the Zoom link, contact Sara at the Reference Desk.

Posted by Reference Department at 7:25 PM No comments: 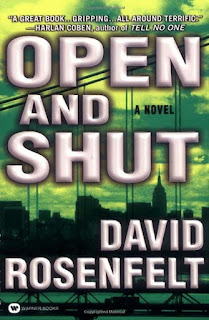 Join the North Providence Mystery Book Club on Tuesday January 4, 2022. We will be discussing Open and Shut by David Rosenfelt. This is the first book featuring defense lawyer Andy Carpenter.

The book description from the author’s website is,” Attorney Andy Carpenter’s legal maneuvers are legion in and out of the courtrooms of Paterson, New Jersey. A talented lawyer who knows how to play all the cards, he is torn between mending a marriage that no longer works and growing attached to a beautiful, no-nonsense private investigator. Besides his love for sports, Andy also adores Tara, a golden retriever clearly smarter than half the lawyers who clog the courts of Passaic County.

Then one day the fun stops.

It all begins when Andy’s father, venerated ex-district attorney Nelson Carpenter, asks him to take the appeals case of Willie Miller, a young black man on death row for the murder of a white woman. Nelson himself had prosecuted Miller but refuses to disclose why he wants Andy to represent the convicted man. A few days later, Nelson drops dead in front of his son at a game in Yankee Stadium.

Suddenly Andy finds himself the inheritor of a staggering fortune he never knew his father had. The astonished advocate soon unearths a mysterious old photograph of a much younger Nelson, a picture that may have a sinister connection to the Willie Miller case. But before he can sort out the truth behind his father’s life and death, Andy receives an anonymous threat — delivered in a most terrifying fashion.

Now the quick witted Andy, with his client’s life hanging in the balance, must uncover a decades-old secret, one so shocking and unthinkable as to threaten everything he believes in and everyone he has ever loved. Caught in an explosive endgame, he will face the heat of a deadly political firestorm…where the wrong move will close out his case for good.”

We will be meeting in the Second Floor Meeting Room and on Zoom at 6:30 pm. For more information, and the Zoom link, see Sara at the Reference Desk.

Posted by Reference Department at 5:46 PM No comments:

Join the North Providence Mystery Book Club on Tuesday December 7, 2021. We will be discussing The Dry by Jane Harper. This is the first book featuring Aaron Falk, a federal agent in Australia.

The synopsis from the author’s website is, “Luke Hadler turns a gun on his wife and child, then himself. The farming community of Kiewarra is facing life and death choices daily. If one of their own broke under the strain, well…

When Federal Police investigator Aaron Falk returns to Kiewarra for the funerals, he is loath to confront the people who rejected him twenty years earlier. But when his investigative skills are called on, the facts of the Hadler case start to make him doubt this murder-suicide charge.

And as Falk probes deeper into the killings, old wounds start bleeding into fresh ones. For Falk and his childhood friend Luke shared a secret… A secret Falk thought long-buried… A secret which Luke’s death starts to bring to the surface...”

We will meet in the Community Room at 6:30 pm and on Zoom. For more information, and the link, contact Sara at the Reference Desk.

Posted by Reference Department at 7:32 PM No comments:

Join the North Providence Mystery Book Club on Tuesday November 2, 2021. We will be reading Detective Inspector Huss by Helene Tursten. This is the first book featuring Irene Huss, a police detective in Gothenburg, Sweden.

The book description from the publisher’s website is, “One of the most prominent citizens of Goteborg, Sweden, plunges to his death off an apartment balcony, but what appears to be a “society suicide” soon reveals itself to be a carefully plotted murder. Irene Huss finds herself embroiled in a complex and high-stakes investigation. As Huss and her team begin to uncover the victim’s hidden past, they are dragged into Sweden’s seamy underworld of street gangs, struggling immigrants, and neo-Nazis in order to catch the killer.”

We will be meeting in the Community Room at 6:30 pm, and also by Zoom. For more information, see Sara at the Reference Desk.

Posted by Reference Department at 7:35 PM No comments:

Join the North Providence Mystery Book Club on Tuesday October 5, 2021. We will be discussing The Unquiet Dead by Ausma Zehanat Khan. This is the first book featuring detectives Esa Khattak and Rachel Getty, who investigate cases in Canada.

The summary from the publisher’s website is, “Despite their many differences, Detective Rachel Getty trusts her boss, Esa Khattak, implicitly. But she's still uneasy at Khattak's tight-lipped secrecy when he asks her to look into Christopher Drayton's death. Drayton's apparently accidental fall from a cliff doesn't seem to warrant a police investigation, particularly not from Rachel and Khattak's team, which handles minority-sensitive cases. But when she learns that Drayton may have been living under an assumed name, Rachel begins to understand why Khattak is tip-toeing around this case. It soon comes to light that Drayton may have been a war criminal with ties to the Srebrenica massacre of 1995.  If that's true, any number of people might have had reason to help Drayton to his death, and a murder investigation could have far-reaching ripples throughout the community. But as Rachel and Khattak dig deeper into the life and death of Christopher Drayton, every question seems to lead only to more questions, with no easy answers. Had the specters of Srebrenica returned to haunt Drayton at the end, or had he been keeping secrets of an entirely different nature? Or, after all, did a man just fall to his death from the Bluffs?”

Join us in the Community Room at 6:30 pm, or contact Sara at the Reference Desk for the Zoom link.

Posted by Reference Department at 7:34 PM No comments:

Join the North Providence Mystery Book Club on Tuesday September 7, 2021. We will be discussing A Beautiful Blue Death by Charles Finch. This is the first book featuring Charles Lenox, a Victorian Era gentleman who solves crimes.

The description from the publisher’s website is, “Charles Lenox, Victorian gentleman and armchair explorer, likes nothing more than to relax in his private study with a cup of tea, a roaring fire and a good book. But when his lifelong friend Lady Jane asks for his help, Lenox cannot resist the chance to unravel a mystery. Prudence Smith, one of Jane's former servants, is dead of an apparent suicide. But Lenox suspects something far more sinister: murder, by a rare and deadly poison. The grand house where the girl worked is full of suspects, and though Prue had dabbled with the hearts of more than a few men, Lenox is baffled by the motive for the girl's death. When another body turns up during the London season's most fashionable ball, Lenox must untangle a web of loyalties and animosities. Was it jealousy that killed Prudence Smith? Or was it something else entirely? And can Lenox find the answer before the killer strikes again—this time, disturbingly close to home?”

Posted by Reference Department at 7:40 PM No comments: 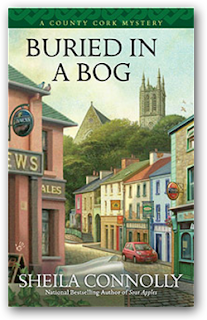 Join the Mystery Book Club on Tuesday August 3, 2021. We will be discussing Buried in a Bog by Sheila Connolly. This is the first in the County Cork Mysteries which, as the series title suggests, takes place in a small village in County Cork, Ireland.

The book description from the author’s website is, “Honoring the wish of her late grandmother, Maura Donovan visits the small Irish village where Gran was born—never expecting to get bogged down in a murder mystery. Nor had she planned to take a job in one of the local pubs, but she finds herself excited to get to know the people who knew her Gran.

In the pub, she's swamped with drink orders as everyone in town gathers to talk about the recent discovery of an almost 100-year-old body in a nearby bog. When Maura realizes she may know something about the dead man—and that the body is connected to another, more recent, death—she fears she's about to become mired in a homicide investigation. Maura has a sinking feeling she may really be getting in over her head...”

Posted by Reference Department at 7:15 PM No comments: